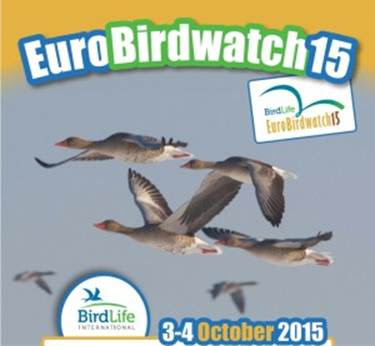 During the international bird watching days Eurobirdwatch 2015, taking place in 3-4 October, more than 220 000 birds from 153 species were counted. Compared to earlier years the result was clearly moderate. Over 100 bird counting lists were sent to the Estonian Ornithological Society, compiled by almost 400 birdwatchers. Most numerous countables were Barnacle Goose (>65 000), various other Goose spp. (32 500), Chaffinch (16 000), Lapwing (12 000) and Brambling (7300). The most often seen bird species were prevailingly Great Tit and Hooded Crow, followed by Eurasian Jay, Magpie, Raven, Blackbird and Fieldfare.


Our Bird of the Year was also recorded: there were 10 Rough Legged Buzzards and 190 Buzzards, 29 of which on the migration movement in Lao, Pärnu County. In the same location 21 Sparrowhawks, over 1400 Wood Pigeons, 25 Black Woodpeckers, 73 Bearded Tits and one Serin were seen. The most interesting event in the Kabli bird station, Pärnu County, was the migration wave of 2400 Meadow Pipits and massive movement of Chaffinches, Bramblings and Reed Buntings. Two late Tree Pipits were also seen.

At Cape Põõsaspea, Läänemaa County, 770 Divers and over 5000 Long-Tailed Ducks were counted during 2 days, while the most interesting species were Purple Sandpiper, Rock Pipit, Razorbill and Common Guillemot. The most interesting birds on Hiiumaa island were 7 Little Grebes and 52 Great Egrets. In Kuressaare Bay on Saaremaa island 3000 Coots were counted. In Virumaa County more than 20000 Barnacle Geese were seen and in Mehikoorma, Tartu County, 16 White-tailed Eagles were counted. Other exciting species, seen during the birdwatch days, were Grey Plover, Broad-billed Sandpiper, Snowbunting, Corncrake, Red-breasted Goose, Shelduck, different terns, Redstart and Lapland Longspur. Surprisingly big amount of Penduline Tits and Bearded Tits were seen and there were even some Swallows and White Storks. Among singularities there was a Hybrid Goose, a leucistic White-fronted Goose and a white-winged House Sparrow. Some domestic fowl were recorded: 30 Leghorn Chicken and 7 Pheasants.

The winners with 111 species were from the club Estbirding, the second and third best teams recorded equally 88 species.

This international event was held the 22nd time already, while there were participants from 41 European and neighbouring countries. About 33 000 birdwatchers were recording more than 5 million birds. The next event takes place in next year’s October 1-2.

Large waterfowl on the go


The very sudden Crane migration wave in the last week of September was perhaps unexpected, but marked the end of the warm "indian summer". When a message from Finland told about 17 thousand cranes starting off from Tampere region and about 14 thousand birds from Pori region, it was like a promise of upcoming crane observation. And they were coming in the daytime and at night, with the NE wind and full moon. Part of these huge flocks, that were starting from Southern Finland, flew straight across Estonia without stopping (a disappointment), but they were in a hurry and had to make their next day ration of 500 km.

For birdwatchers there was still the spectacular gathering of different goose species. Tens of thousands of Barnacle Geese and Bean Geese could be watched reciprocating between the feeding areas and resting and sleeping areas. During the latest decades over 100 thousand stopping Barnacle Geese have been annually counted only in the Matsalu region. There are equally good watching locations both in the Northern and Southern coast of Matsalu Bay. With a bus, full of people, we were lucky to watch almost endless flight of geese over the Silurian limestone cliff in Kirbla.

In the gathering sites passers-by can occasionally watch hunting eagles among thousands of geese taking wing. Despite that West-Estonian fields and coastal meadows are perhaps the best restaurants and hostels for these restless birds on their way.

Almost a week ago, late at night, taking long-exposure photographs of Aurora Borealis all over the starry sky, it was almost relaxing to hear the arrived Whooper and Bewick Swans on nearby shallow bays. Next morning observation revealed hundreds of Wigeons and Mallards among them, also some Teals and Goldeneyes. During the upcoming weeks some more thousands are expected to arrive and stay here until the shallow coastal sea is fully frozen. 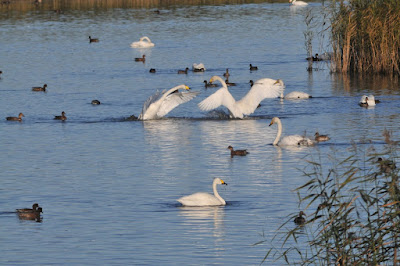 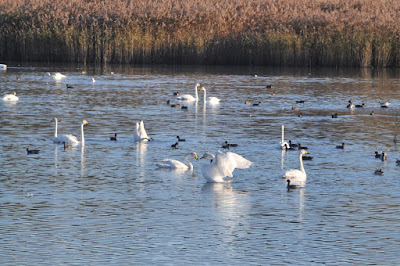