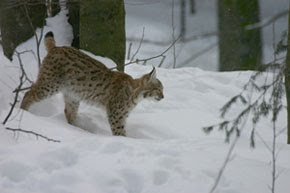 The Polish branch of the World Wildlife Fund (WWF) is hoping that lynx from Estonia will save the Polish local lynx population.

WWF considers Estonian forests to be very similar to those in Mazur, therefore the relocation of the feline should not cause any major adjustment problems for the animals. However, it is still unclear how many lynx will be allowed the transfer to Poland and the timeline is still being worked out.

According to the Polish Radio website, the lynx has been an endangered species in Poland since 1995. In Estonia there is large population of lynx present across the country and they are not a protected species. In Estonia hunting for lynx is allowed.

Email ThisBlogThis!Share to TwitterShare to FacebookShare to Pinterest
Labels: Lynx

Estonian nature is among the richest in Europe 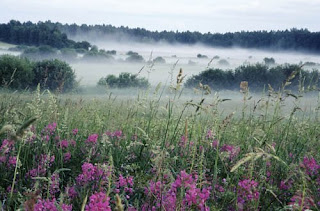 In celebrating Estonia’s nature conservation efforts 100th anniversary, the Ministry of Environment made some investigative summaries of our natural resources. The discoveries showcased Estonia among the forefront of natural heritage along with other Northern European countries.

Lilika Käis, Ministry of Environment nature preservation department main specialist, said that “The uniqueness of our natural environment as well as the diversity in our fauna is attributed to our geographical position.” Estonia in naturally a multiple border country: placed between a continental and a marine climate we have a temperate climate while across the whole of Estonia is a border between the limestone and poorer sandstone rocks. In addition we are located at the southern border of the coniferous forest zone.

“That is why Estonia has such diversity in natural conditions — we have the presence of conifer as well as broad-leaved forest and other natural sites such as coastal cliffs, dunes, sand- and stone beaches. Thanks to that positioning many species live only within these limits - for example a third of our vascular plants,” said Käis.

The dimensions and the presence of boulders in Estonia puts us in the forefront of the North-European glacier formation – an astonishing 90% of the gigantic boulders are located here.

The presence of meteor craters by area density ranks as number one in the world with 8 craters in: Ilumetsa, Kaali, Kärdla, Lasnamäe, Neugrund, Simuna, Tsõõrikmäe ja Vaidasoo.

Different bog communities cover nearly one-tenth of Estonia, and in terms of protected bogs, we are also at the forefront of the world - about half of the bog communities are under protection. "Intensive agriculture in densely populated Europe has destroyed nearly all the wetlands, and conservationists are involved in the restoration," said Went.

Particulary species-rich are Estonian meadow communities. For example, it has been counted that the Western-Estonian wooded meadow Laelatu has 76 different vascular plants in one square meter and that makes Laelatu special in the whole world. "If we take an example of Western and Southern Europe’s meadows that have impoverished flora then our semi-natural meadows give the opportunity to admire the plants that are destroyed or have become rare in Europe," said Käis.

Estonia has more coastal meadows, alvars and wooded meadows than any other European country, and also one of the biggest floodplains – 4000 ha large Kasari floodplain.
Estonia protects 18% of its mainland and almost 1/5 of its’ aquatic terrain. “For example, we are ranked 5th in the EU by having a Natural network that covers 16.7% of Estonia, “said Käis.

There are over 26 000 known species in Estonia, but in reality that number may reach as far as 40 000. Over half of the species found in Estonia are invertebrates that inhabit forest. Species that are considered rare in Europe are wolves, bears and lynxes, but their populations are doing well in Estonia according to Käis.

Estonia is also a paradise for migrating birds – we are located on the East-Atlantic migration route of many species of waterfowl and in every spring and fall millions of birds pass through here. Our coastal waters are the most important stop for many birds between nesting and wintering areas. For example, approximately half of Greater Scaup stop in Estonian waters on their spring migration, as well as thousands of Long-tailed Ducks, Divers, Geese and Common Cranes.

Latvia and Lithuania have sea without islands, Finland and Sweden have generally high rock islands. Estonia has predominantly shallow marine islands and islets, there are more than 1,500 of them. Those are unique bird islands in the whole Baltic Sea and therefore Estonia is an internationally valued bird watching destination.

Limestone, which is mainly in the upper layers of rock, has been selected as our national rock because of the powerful shapes created where the cliff face erodes.

North-Estonian clint is part of the Baltic clint layer and the highest and most notable section covers about 300 km of the Baltic clint. This rock allows us to track the history of the Earth from about 80 million years ago. We can find waterfalls and cascades from the North-Estonian limestone and limestone is also associated with such landscapes as karst, secret rivers, caves and craters which are widespread in Estonian limestone area. 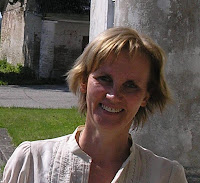 First contacts with nature: childhood memories
I was born in the countryside near the woods and mires. Before school I was mostly raised by my grandmother, who lived some kilometres away in a small homestead. Grandmother lived alone and most of her time was spent on farm work. I had to learn early how to amuse myself. My favourite activity was playing “home” near the farm between the disintegrated stone walls that were overgrown with bushes. I cleared the surroundings of tree branches and decayed leaves then designed, from different moss patterns, “rooms” and “resting corners” for sitting and sleeping. Often I was so intent on my task that I forgot to involve my dolls and doll’s cookwares, time passed so quickly and interestingly...

Sometimes I sneaked away to the forest stream kilometre away. It was strictly forbidden, but I liked to watch the slow running water. I played barefoot along the shore with coloured stones, at the same time taking notice of not being away from home for too long. On the way back, I always gathered bunch of goutweed for the sheep - it helped to better cover up my mischief.

I remember a moment. It was a winter afternoon and my grandmother decided to go through the forest with me to visit my parents. The journey was only 4 kilometres long, but so much snow and stormy weather slowed our pace and it took much longer to arrive than grandmother had expected. Pitch-darkness made us scared of losing our way. When reaching the glade, grandmother remembered that there was a hay barn nearby and went to look for it. Minutes alone in the dark seemed to drag and I remembered that it never came into my mind to break my grandmother’s trust and wander away because I knew I would be totally lost. I was 4 years old, but still aware of the inevitability of the situation and supremacy of the wild nature. All’s well that ends well - my grandmother found the shed and we stayed the night and continued the journey in the morning. Grandmother caught a cold and fever that was hard to get over. Years later, grandmother recalled the moment with terror, what would have happened if I had moved even a metre from where I was told to stay!

At the present
I've spent many hours in the forest and the coast with my clients, colleagues, guides and therefore I have learned a lot about nature. I am like a child of nature -I have respect for all living things around me, including people. I can sit in my garden for many hours and look at the meadows towards the sunset. It is like a movie out there – Woodpecker’s making noises over my head, Golden Oriole singing beautifully, from the distance you can hear Bitterns booming, Tawny Owls hunt in the evening, Goats are bleeting, a Fox is coming closer to the garden...and there are many things you can’t even see or hear. A good and complete life is when you have an activity which grabs you, evolves you and having close people who encourage you. You have to know how to remember that the process itself is more important than the goal. You can’t be afraid to get lost and to be yourself, even if there is a danger to be left alone. And you can’t waste your time thinking about the things you can’t do, but you have to concentrate and put all your energy into things you can do. You have to occasionally remind yourself what really is important in life – having important people around you, moments, feelings, and so on. If you know how to carry these simple things in your life, then you will have a good and complete life.

Sometimes I have experienced this kind of life, but not always. I have to remind myself that the magic is to evolve. I have learned to have a good and complete life during entrepreneurship. I have faith in life!

Marika Mann
Posted by Estonian Nature Tours at 10:16 AM 1 comments

Despite the cloudy, cold and windy days at the start, we only experienced rain on one afternoon and evening, and with the skies clearing leaving a beautiful final full day and a half, the changes helped move many migrants and provide us with some superb birding spectacles. The mass exodus of Common Cranes and mass arrival and passage of Barnacle Geese at the start, followed by large numbers of seemingly disorientated small birds over the Sõrve bird observatory and movement of small birds, especially those gorgeous white-headed Long-tailed Tits, at the Kabli ringing station were all excellent examples of the phenomenon of visible migration at this migration crossroads. Apart from these spectacles, I’m sure we’ll all have our own highlights, with the Racoon Dog running along the road, the surprise Eurasian Eagle-owl, or observations of both Grey-headed and European Three-toed Woodpeckers in the same tree, probably figuring among them. I hope so! And 142 bird species recorded on an autumn tour certainly can’t be bad going!
I look forward to seeing you again on a Travelling Naturalist tour, and wish to thank you all for helping make this such a rewarding, and indeed groundbreaking, holiday.
Very best wishes, John Muddeman / The Travelling Naturalist

Read the whole tour report
Posted by Estonian Nature Tours at 5:13 AM 0 comments