ENT guide Neil Aldridge is the 2014 European Wildlife Photographer of the Year!

"It’s with humility and immense pride that I can announce that my photograph ‘Living Rock Art‘ has won me the overall title of 2014 GDT European Wildlife Photographer of the Year.". The full story can be seen here... 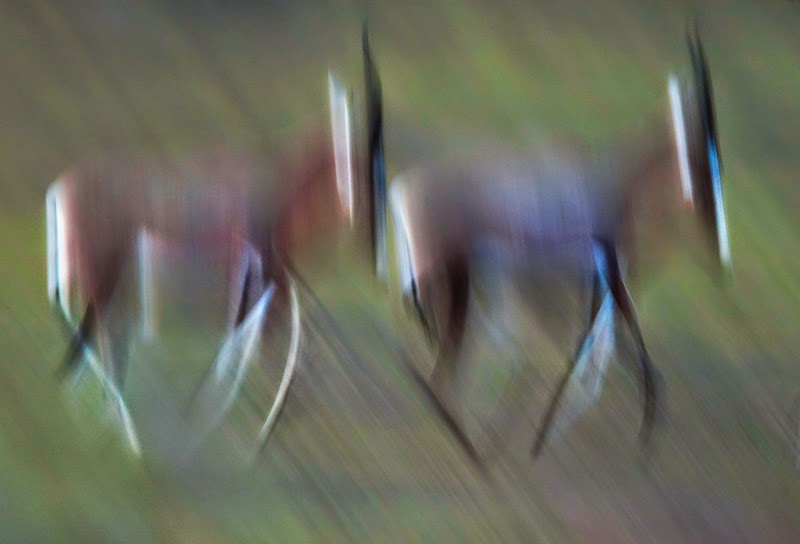 Join Neil Aldridge and Remo Savisaar and travel from coast to forest and from bog to riverbank photographing Estonia's wildlife and wild places. Highlights of the trip include the chance to photograph bears and other forest-dwelling mammals like elk and wild boar. Beaver sightings have also been excellent on previous trips. Estonia has great swathes of forest and picturesque bogs that give the chance to focus on landscape photography. On top of that, Estonia boasts a bird list of over 300 species. 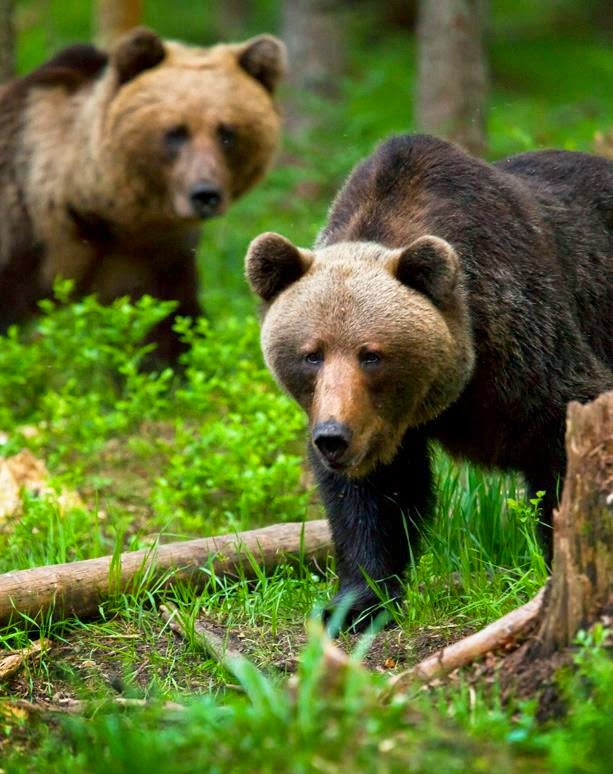 We are pleased to forward a press release of the international wildlife photography competition Oasis Photocontest 2014:

The new edition of Oasis Photocontest 2014 is finally here, promoted by Oasis magazine. The major Italian competition of nature photography and one of the most important worlwide.
Registrations are open until 31 December 2014. Registration...

"For all fans of photography, it is a great opportunity to present your work to the general public, thanks to its wide diffusion, result of a major promotion in Italy and abroad, the catalogue and Oasis Photocontest exhibition, which every year tours Italy stopping by in the major cities. Last year this event was attended by over 350,000 people", Alessandro Cecchi Paone, Oasis' new editor in chief.

More than 100 recognitions and a total money prize of 30,000 Euro. The overall winner will receive a cash prize of 2,000 Euros and the prestigious Oasis Photocontest trophy, a valuable sculpture in bronze made by the Italian artist Michele Vitaloni. The best Italian author will receive a prize of 1,000 euros. Important cash prizes will be given to the top three winners in each section.

Another great prize that we have consists of the publication of your photo in the official Oasis Photocontest 2014 catalogue, the most important showcase of nature photography in Italy and at international level, printed in English and Italian. In addition to the best 103 awarded images, the catalogue will feature a thousand photographs that will have reached the final.

This contest is divided into 9 sections (young people under 18 can participate in a category reserved for them):
LANDSCAPES
MAMMALS
BIRDS
ALL THE OTHER ANIMALS
STORYBOARD: STORIES TOLD THROUGH PHOTOGRAPHY
UNDERWATER PHOTOGRAPHY
PEOPLE
PLANTS
PETS

The deadline is December 31, 2014.
All information and registration details can be found on the official website: www.oasisphotocontest.com
For journalists, bloggers and association leaders, we provide you with some high resolution images of last year's edition of the competition which you can download by clicking on the link below. Please inform your readers and associates about the new edition of our contest, they will surely welcome it.

Thank you
the staff of Oasis 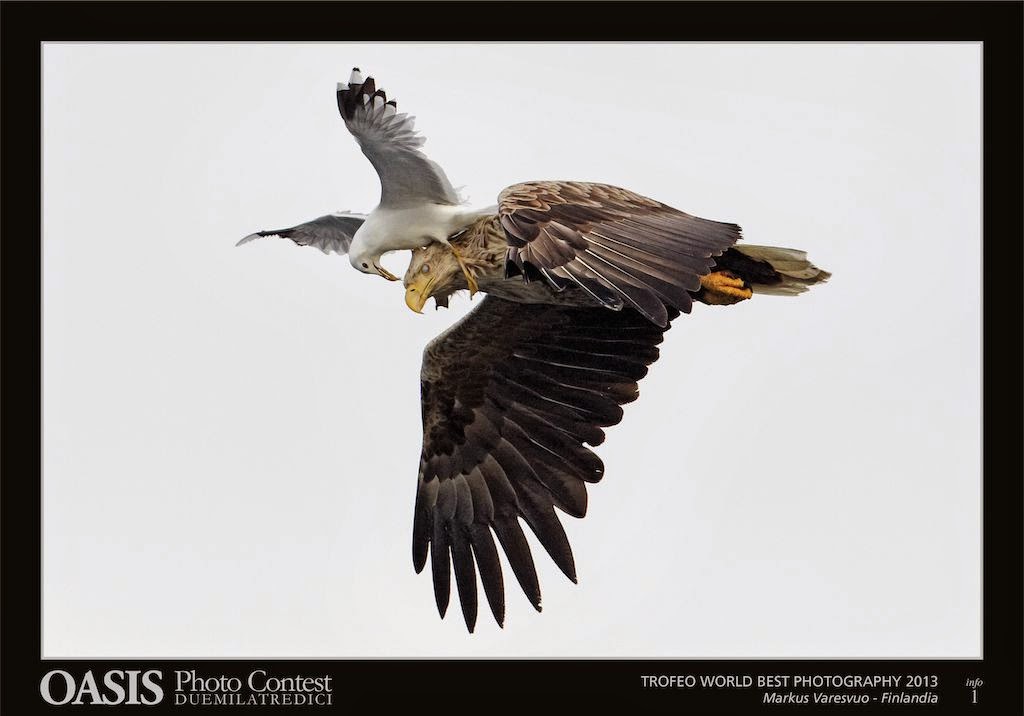 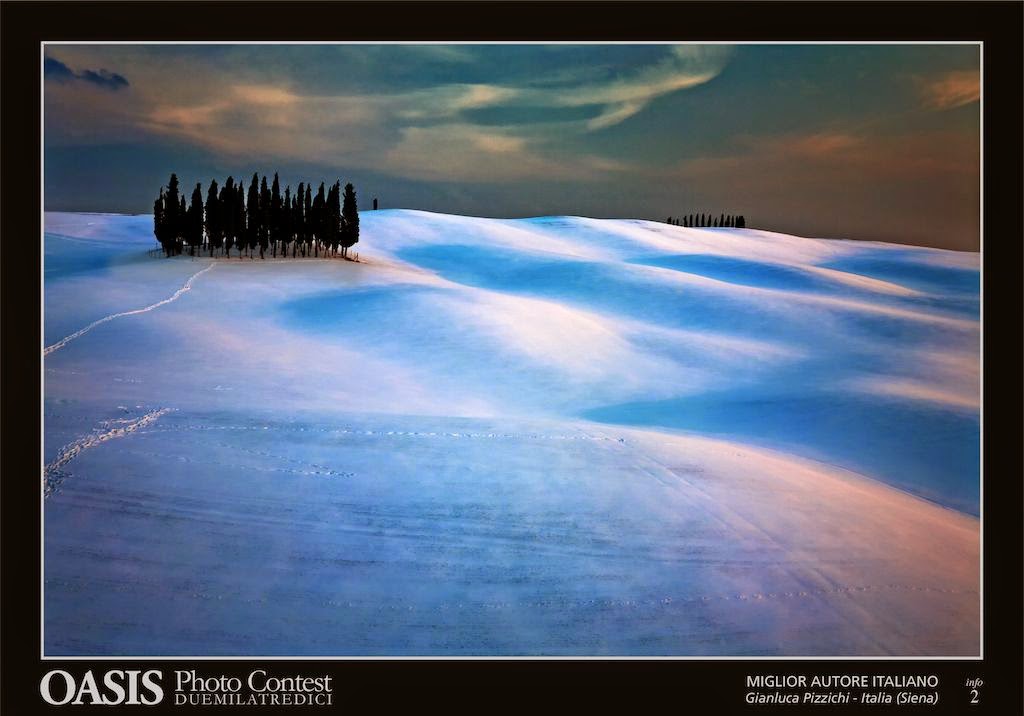 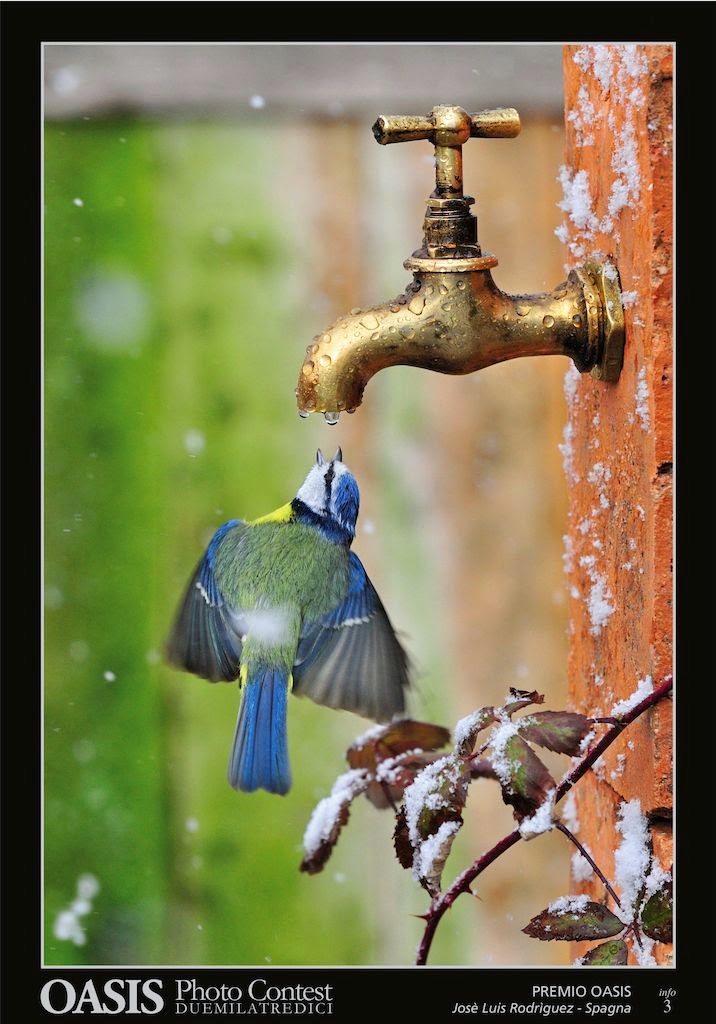 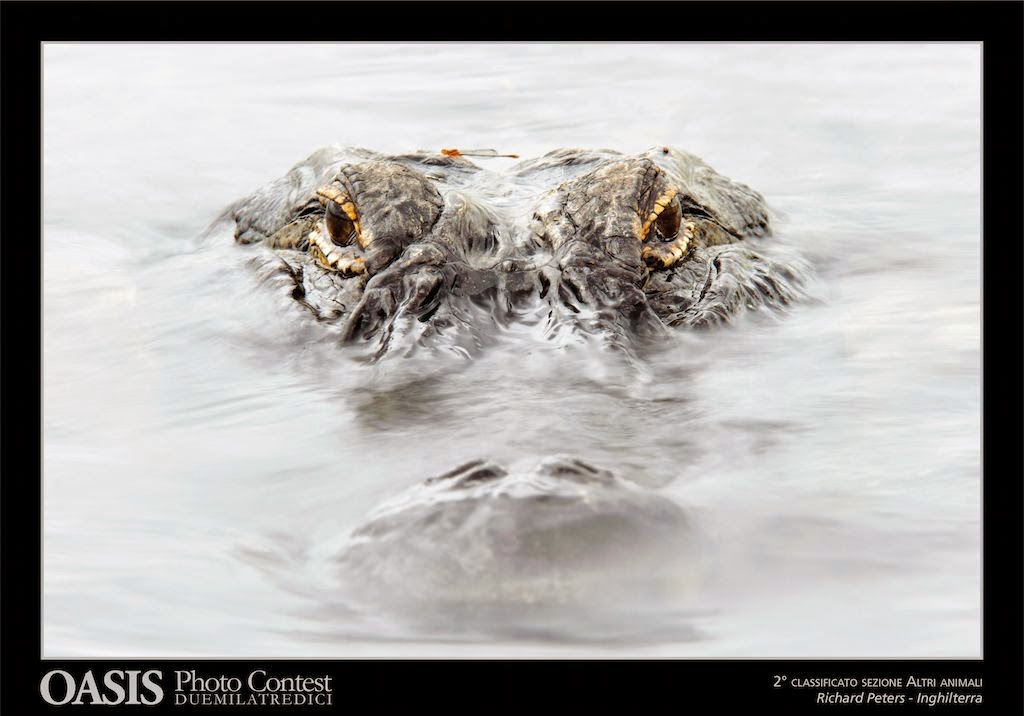 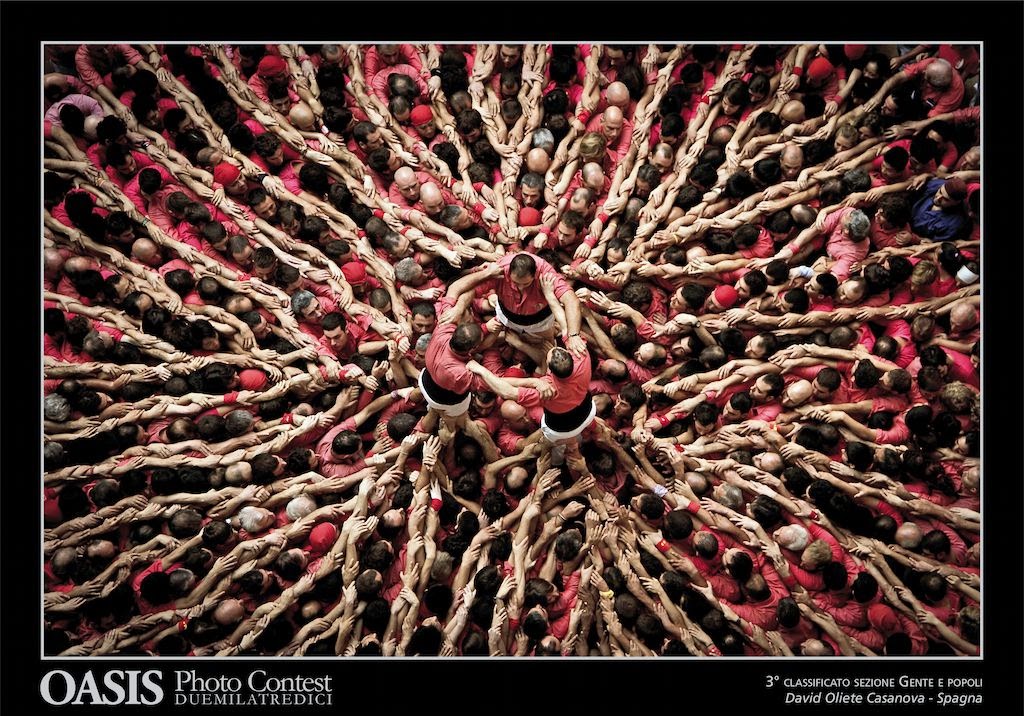 Abundance of mammals in Estonia


The abundance of Lynx has dropped significantly recently and researchers have therefore suggested to stop hunting this carnivore in the upcoming season. The reason for the decline has been a sharp drop in the abundance of Roe Deer in 2010, when females were no longer able to supply their offspring by adequate nutrition. Over the last two years, three adult female Lynx have been equipped by monitoring devices. The average size of their territories has been 200 square kilometers. When Lynx abundance was high, the average size of male territories was 180 square kilometers, but this year's territories are on average four to five times higher, 800 square kilometers! 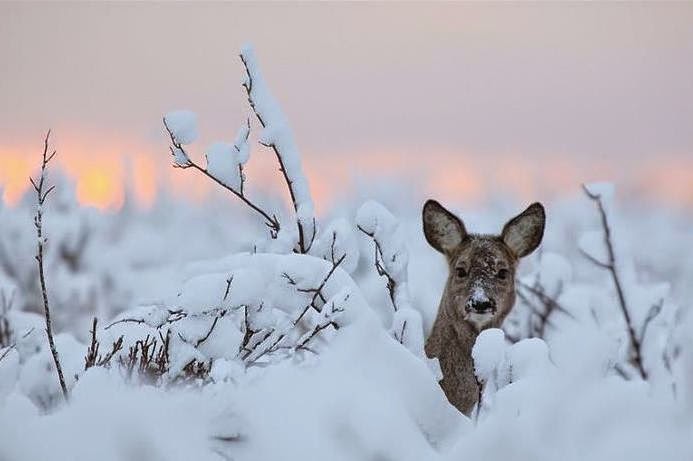 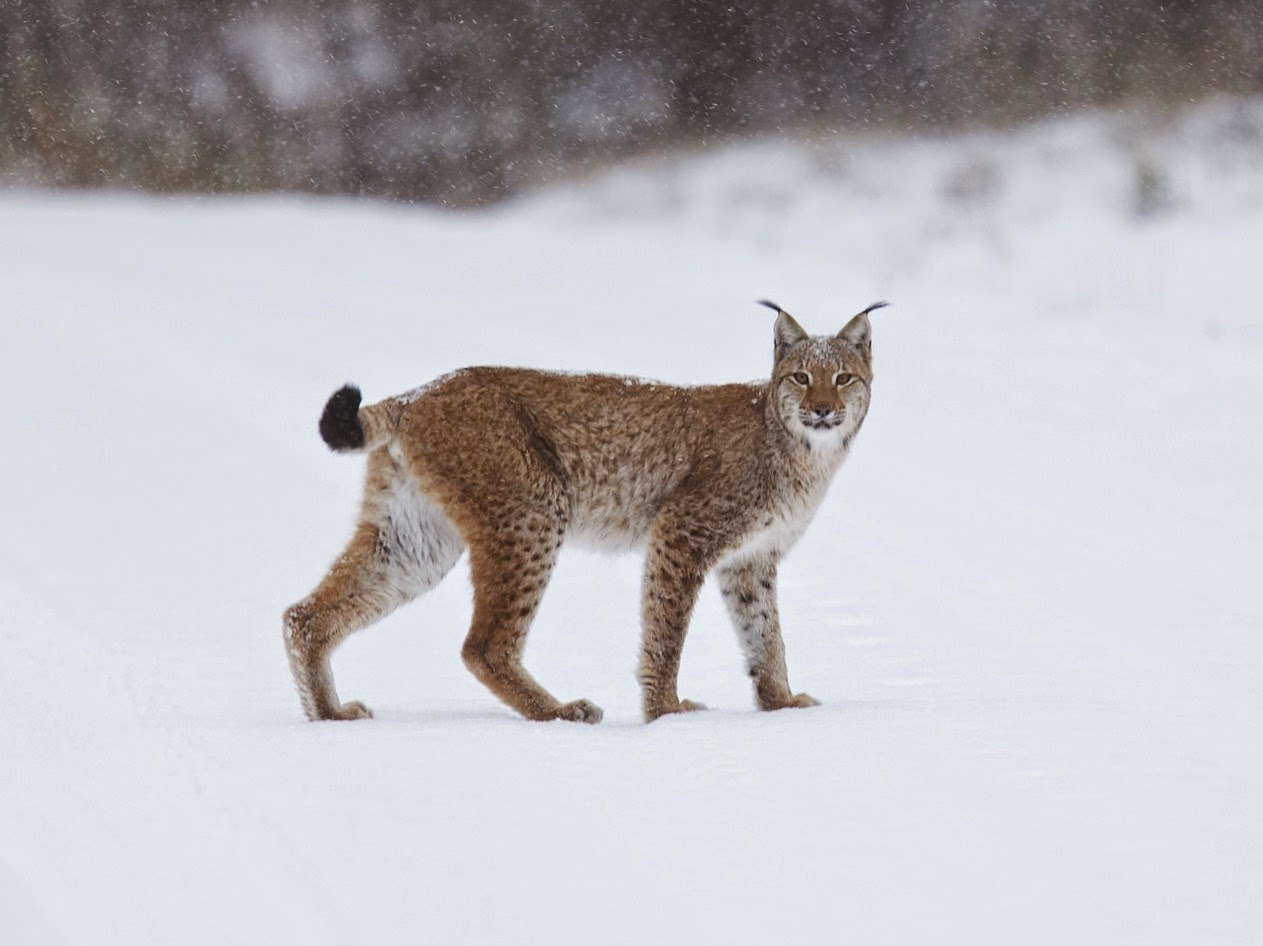 
There has also been a slight decline in numbers of Brown Bear and Wolves. There were about 20 Wolf packs in Estonia this year after a steady decline from 31 packs in 2011.  Wolf packs are found in specific area and this is not influenced by other wolves in areas nearby.  Since last summer, local researchers were able to observe in detail the movements of two Wolf packs in Pärnu and Viljandi County as the alpha females of these packs were radio tagged.  Both of the territory sizes were found to be in the range of 700-750 square kilometers. The amount of damage caused to farmers by wolves has continuously declined since 2011, which is probably due to the decrease in their numbers. 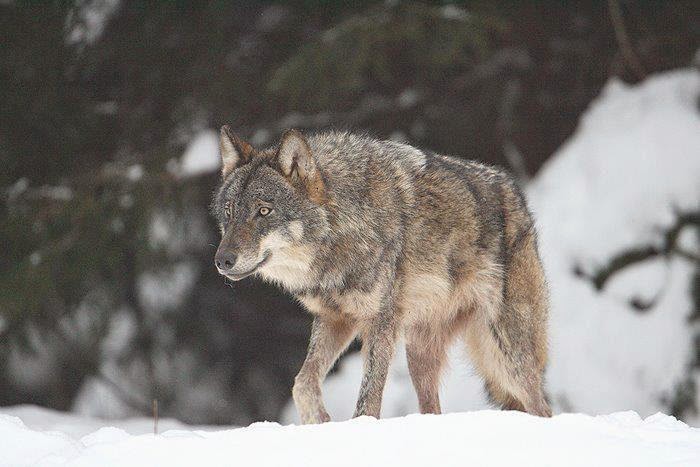 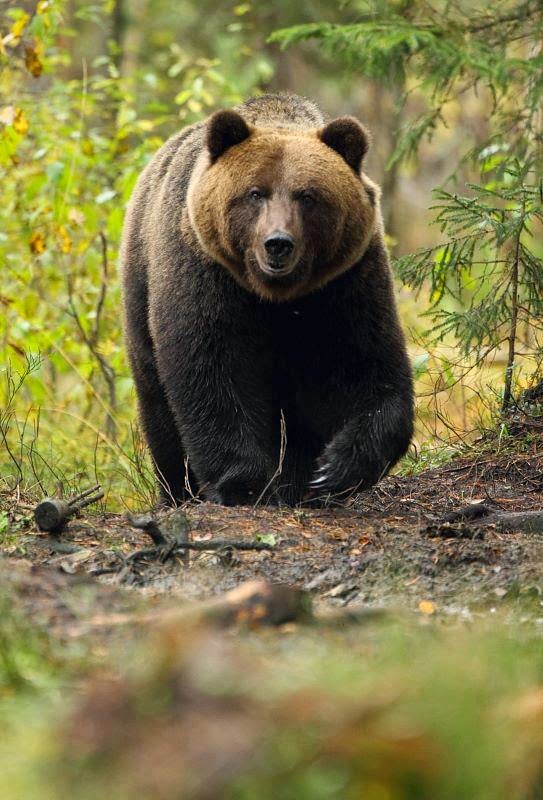 
The abundance of Wild Boar and Raccoon Dogs is still high but there has been a moderate decline in Elk and Red Deer numbers which primarily inhabit in the two islands, Hiiumaa and Saaremaa. Roe Deer populations that were severely damaged by previous snowy and very cold winters have begun to recover.
The numbers for Pine Marten and Beaver have fallen slightly, but more significantly for Foxes, while numbers of European Polecat, Badger, Mountain and European Hare have increased. Also of interest - a new species of mammal was recorded for Estonia - the Golden Jackal, a species who's range has been gradually moving north and west in recent years. 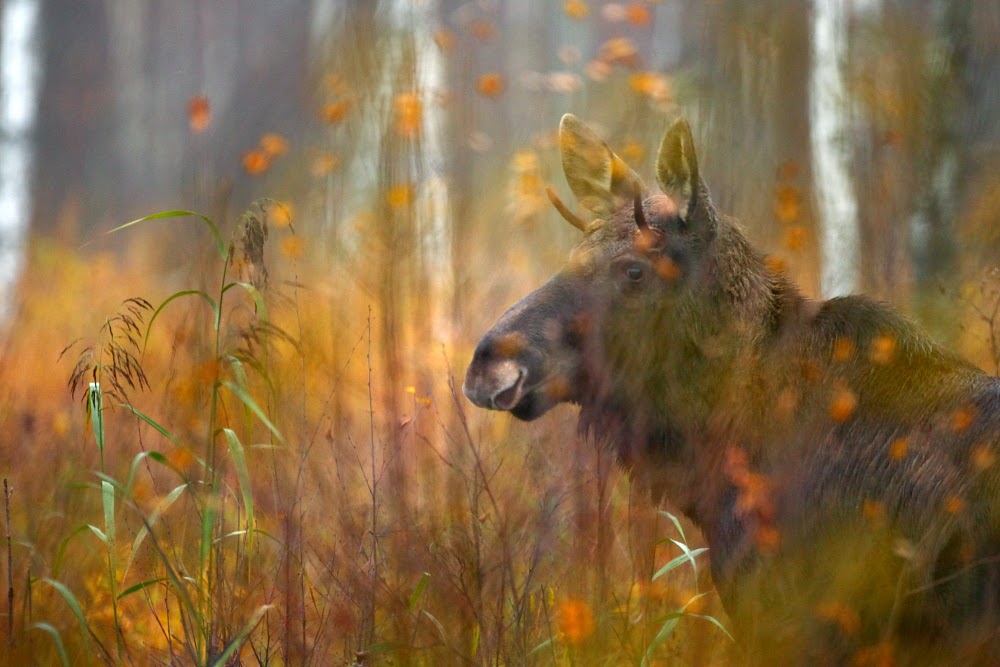 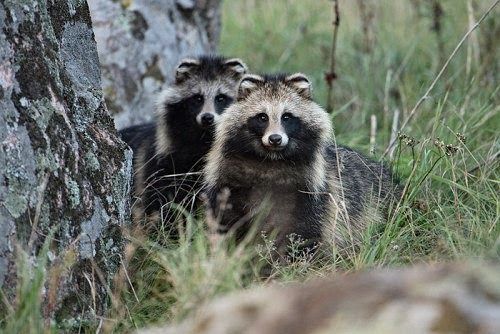 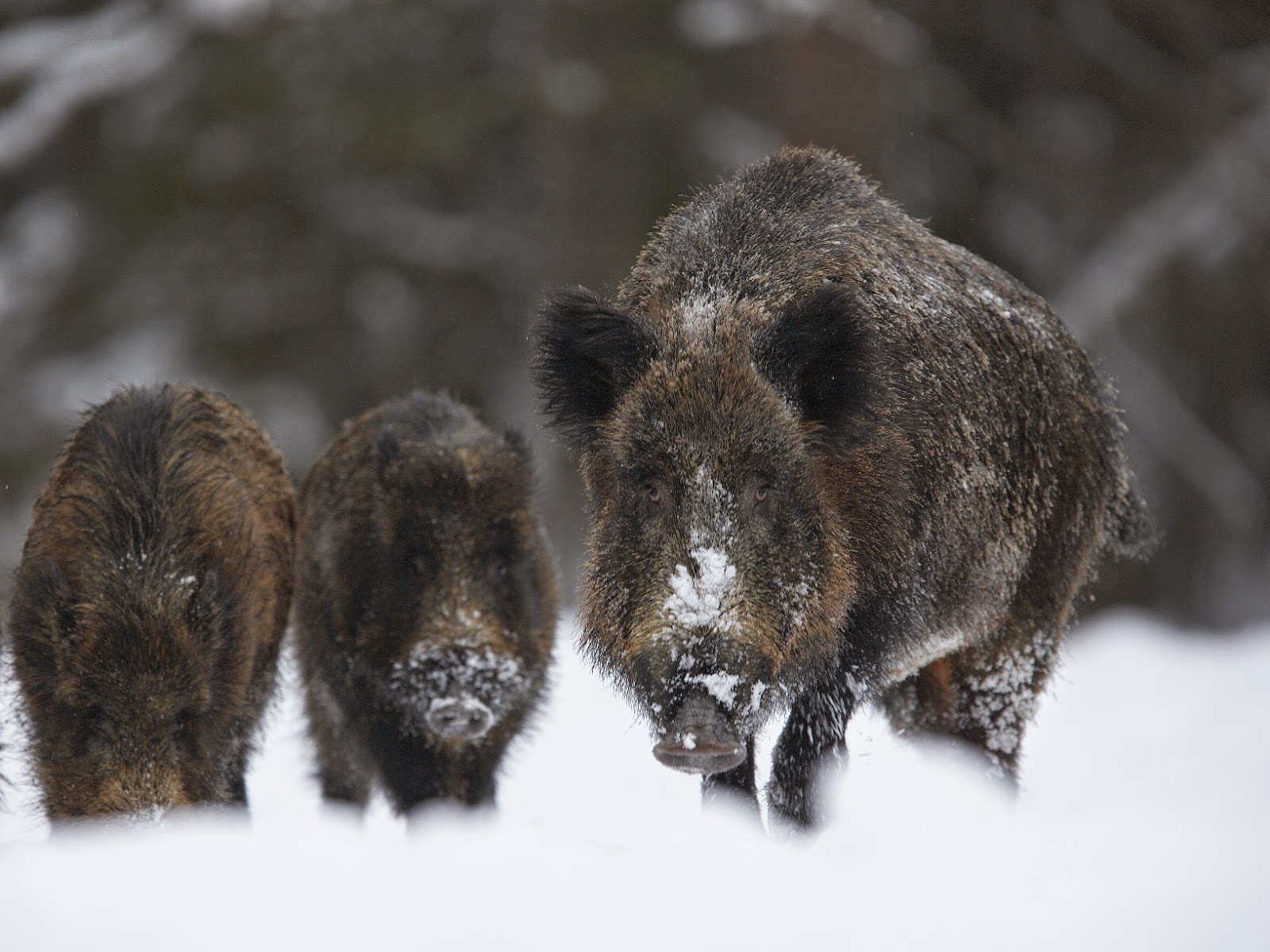 On the current migration map the autumn season started in mid-July. Our new Osprey named Tiiu has surprise us all as no previous Estonian Osprey has gone to western Africa. Seems Tiiu wants to stay in Cote d'Ivoire.

The hybrid Spotted Eagle (mix between Greater and Lesser Spotted Eagles) Tunne started in July and used quite a different migration route to last year, flying first northwards, from Russian Kaliningrad oblast to Latvia and then stopping near the Bosporus in Turkey. Last year he wintered 750km westward, in Montenegro. 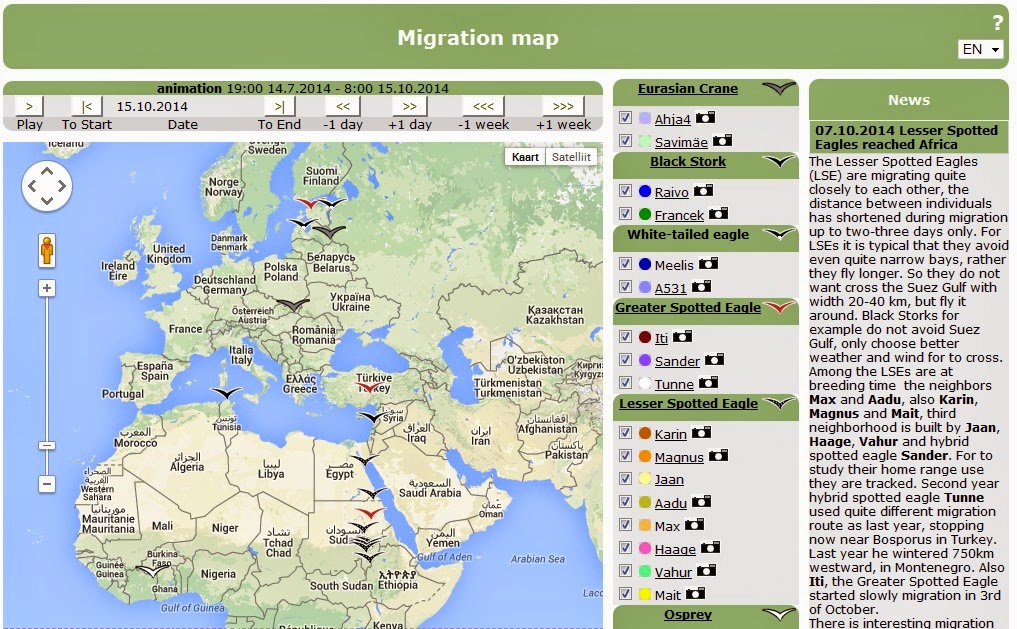 Our Black Stork, Raivo, was rather late with breeding this year and therefore started his journey south quite late too.  He made good time with his travels however and arrived at his wintering grounds in Near East, Jordan Valley by 15th September.  A new Black Stork on the map is from Slovenia, his name is Francek. Francek started to migrate in 8th August and took quite a dangerous route over southern Italy and Sicily. According to the data Francek stopped over in the Rosmarino River mouth in northern Sicily. Probably that was caused by stormy weather there, but after awhile Francek continued his journey. He is in now in northern Tunisia.

Our famous Crane Ahja 4, began migration on 24th Sept and moved from Estonia to Belorussia. It will be interesting to see where he winters this year as last winter he spent wintered in Ethiopia together with its parents.

Lesser Spotted Eagles (LSE) are migrating quite close to each other and the distance between individuals has shortened during migration to just two-three days. There are more LSEs on the map than earlier as satellite tags were being used to collect data about their home range and the migration data is extra information. For LSEs it is typical that they avoid crossing even short expanses of water and will ganerally prefer an overland route even if it is longer.  For example they don't like crodssing the Suez Gulf even thought he width is only 20-40 km, but fly round it, whereas Black Storks do not avoid Suez Gulf, but choose better weather and wind to make the crossing.

The Greater Spotted Eagle Iti started slowly migration nn 3rd October. There is still no data about Tõnn, probably our most famous bird during the years...


The international birdwatching event EuroBirdwatch 2014 on the weekend of 4-5 October was attended by 40 countries from Europe and Central Asia. In Estonia, over 300 people participated in the event and collected 98 sighting lists, the longest of which was 111 species of birds. At several places in Estonia it was also possible to join a guided birding trip. During the weekend over 400,000 birds of 166 species were observed..
Despite the beautiful weather the passerine migration was not great and inland the number of the birds was extremely low. But the situation was totally different near the sea. At Põõsaspea Cape, the international event celebrated by 60-70 birdwatchers from Estonia and abroad saw some superb migration with the season's best counts: nearly 90,000 birds in all. An early passage of Long-tailed Duck produced 58,000 birds with smaller, but still impressive, numbers of Velvet Scoter (5,500), Wigeon (6,300), Pintails (1,050), Scaup (2,300), Red-throated Diver (720), Barnacle Goose (6,800) and Brent Goose (2,180). Also worth mentioning are Dunlin (133) and Grey Plover (32). 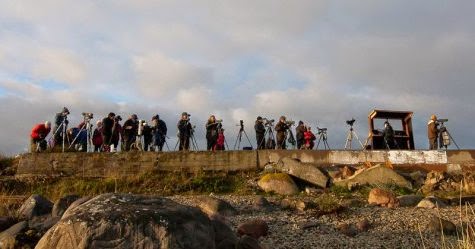